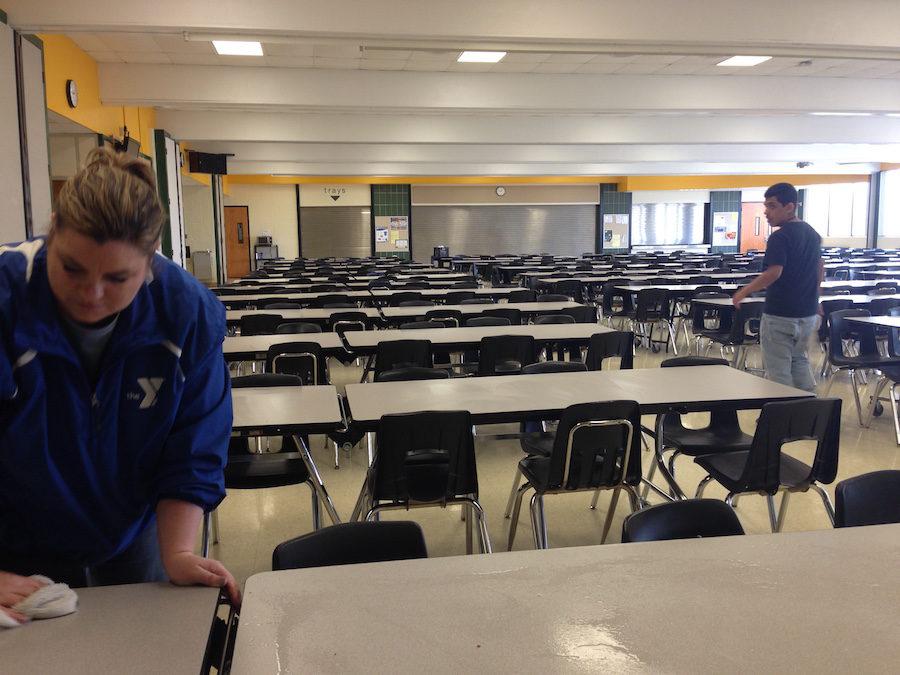 A student helps a teacher clean the tables after lunch.

Clangs and scrapes can be heard from the cafeteria during seventh hour. The custodians, and some students, are hard at work cleaning the mess left from the three lunches.

The occasional scrape of a chair, or short conversation broke the silent hum of the lunchroom. Lights flickered and hummed, fridges and water fountains buzzed, and the custodian’s keys jangled. The cafeteria smelled like a mixture of chemicals and canned fruit.

As they cleaned, the custodians chatted about one of them leaving to go to Shawnee Mission North. He talked about his plans for cleaning the school before leaving in April, “I’ve been planning on stripping the classrooms over Spring Break,” one custodian said.

The custodians clean from the front of the room to the back wall with the mural. The teacher and her student are having their own side conversations.

The student and teacher clean as she asks him how he is doing and encourages him to keep moving.

After almost 10 minutes of silence, one of the custodians sprinted out of the room to another place in the school. This seemed to distract the student, who didn’t get back to work until after numerous requests by the teacher to get back to work. Work like this went on for five minutes, when four people entered, two students and two teachers. Smiles spread across the faces of the teachers as the students went to introduce themselves and began joking with each other.

Outside in the hallway, students passed without a glance. Muffled voices can be heard from the restrooms. One boy came from the woodshop room tapping a rhythm on his hall pass. Track coach James Wannamaker walked past with a TV on his way to set up for practice. Two girls passed by gossiping and giggling to each other about a boy.