Why the Extra Day? 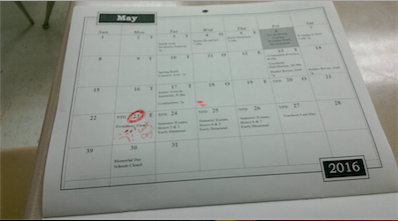 Because we used a snow day, for the Royals parade, school will not be ending May 26, but instead on May 23. The district will have all schools hold classes for half the day.

We shouldn’t have to come to school on Monday. Most people will just sleep in or forget we have school that day at all. South will be at school for a whole three hours, so we can finish finals. The finals should have been rescheduled so we don’t have to go to school Monday.

It’s hard enough to stay focused on school. It’s even harder when you get back from a weekend and know you don’t have school Tuesday. On top of that we have finals to focus on, and those are never easy. How are we supposed to work when we are excited about summer?

Blue Valley and Olathe school districts don’t have school on the May 23. So while other students, and friends are out of school enjoying their first few days of summer we are finishing our last day? How does that make sense?

I can see why we have to stay that day. For a little extra time to make up for the day we were out to go to the Royal’s parade, but there were so many other days they could of had us come to class, but they let us have those days off.  Maybe we could have used a teacher work day instead of having to go May 23.

So we shouldn’t have that last Monday of school, it should have been a Friday.